Elisabeth Mann Borgese died on February 8th, 2002. To mark the 10th anniversary of her death, in 2012 the Buddenbrookhaus in Lübeck organised the first-ever exhibition about Elisabeth Mann Borgese (Katia and Thomas Mann’s youngest daughter) in Lübeck. In cooperation with Geomar in Kiel, the Helmholtz Centre for Maritime Research, the exhibition was shown subsequently in Kiel and Berlin. Parallel to the exhibition, a collection of scientific essays and a number of previously unpublished photos and documents were published by the Hamburg-based mareverlag.

IOI-Canada assisted with preparations for the exhibition in Lübeck, Germany and the publication on Elisabeth Mann Borgese by facilitating access to the Elisabeth Mann Borgese Archives at Dalhousie University, arranging introductions to former colleagues and friends, and making available resources including papers and photographs. A number of items were loaned to the exhibition as well as photographs for the publication.

A catalogue entitled 'Elisabeth Mann-Borgese and the drama of the seas' edited by Holger Pils and Karolina Kühn gives the complex and fascinating life portrait of a fighter for the seas. This catalogue includes an anthology of essays from literature, jurisprudence and marine research, personal memories and literary portraits.  Copies of the catalogue are available from the Buddenbrookhaus Museum website here.

The IOInforma 0512 news bulletin below also refers to this event. 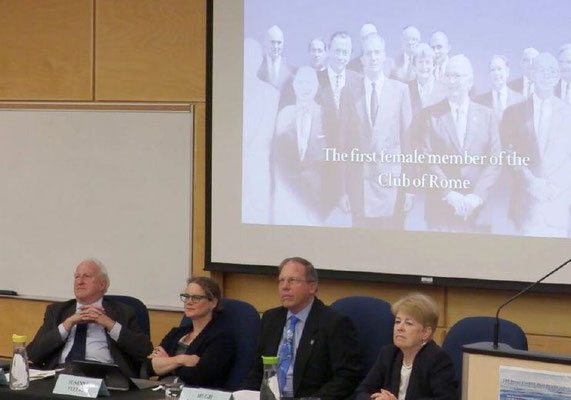 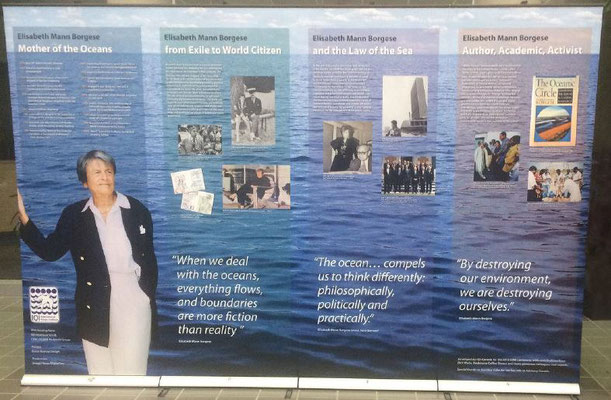 This year’s World Oceans Day marked the launch of IOI Canada’s Elisabeth Mann Borgese Centenary events in honour of the 100th anniversary of Elisabeth’s birth. A special version of the annual Elisabeth Mann Borgese Lecture was held in the evening of 8th June as the first in a series of three lectures at Dalhousie University scheduled over a four-month period. Other centenary activities include an upcoming volume of over 80 essays, based on themes and issues covered in IOI Canada’s interdisciplinary training programme, and a commemorative display. Details are available on the Centre’s website at:

The World Oceans Day public event began with a brief introduction to Elisabeth and her work from Michael Butler, Director of IOI Canada. It included a screening of the video “The Three Worlds of Elisabeth Mann Borgese”. This short but evocative vignette was produced by a Nova Scotian digital artist, Anne Macmillan, and can be viewed online at:

An interdisciplinary panel then followed, with presentations and a discussion on a subject chosen for its relevance to Elisabeth’s vision and her emphasis on the concepts of Pacem in Maribus and the Common Heritage of Mankind: Peace and Equity in Ocean Governance - Possibility or Pipe Dream? The panel was comprised of Vice-Admiral (ret'd) Glenn V. Davidson, former Ambassador of Canada to Syria and Afghanistan; Susanna Fuller of the High Seas Alliance and also Senior Research Fellow, IOI Canada; and Hugh Williamson, Adjunct Professor, Marine Affairs Program, Dalhousie University, and Senior Research Fellow, IOI Canada. The lively discussion period was moderated by Wendy Watson Wright, Chief Executive Officer, Ocean Frontier Institute. Approximately 120 people attended and were drawn from a range of backgrounds, ages, countries and interests. A video recording of the event is available upon request.

The panel was followed by a reception which gave an opportunity not only for networking and further discussions but also for viewing the specially commissioned Elisabeth Mann Borgese centenary exhibit at its first public outing. This portable four panel display highlights and celebrates key aspects of Elisabeth’s life and work through a combination of photographs, text and quotations. Finally, for World Oceans Week, Elisabeth was featured in the local newspaper and on the university website as one of the “Dalhousie Originals”, an initiative of the university in celebration of its own 200th anniversary this year. IOI Canada staff had nominated her for this recognition as one of the key individuals over the last two centuries who had “inspired, challenged and strengthened Dalhousie and the world".