Elisabeth Mann Borgese (April 24, 1918 - February 8, 2002) founded the IOI in 1972 as a knowledge-based non-governmental, non-profit international organization devoted to the sustainable development of the oceans. The IOI works to uphold and expand the principles enshrined in the United Nations Convention on the Law of the Sea for the benefit of humankind as a whole, with particular consideration of the poor.  The mission of the IOI is to promote education, training and publications to enhance the peaceful uses of ocean space and its resources, their management and regulation as well as the protection and conservation of the marine environment, guided by the principle of the Common Heritage of Mankind.

Elisabeth Mann Borgese was instrumental in encouraging world leaders to rethink our relationship with the oceans and our management of marine resources. She became known to the ocean community, the underprivileged and marginalized coastal communities as the Mother of the Oceans. 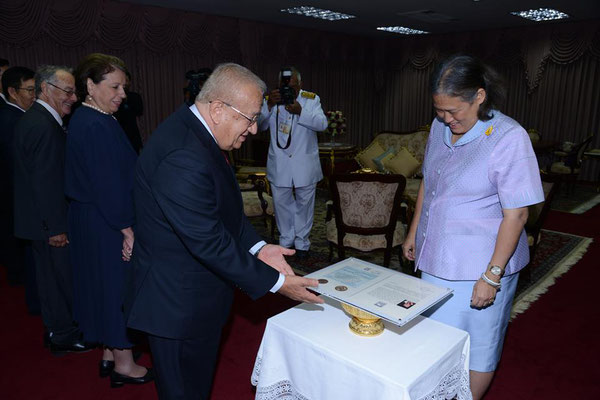 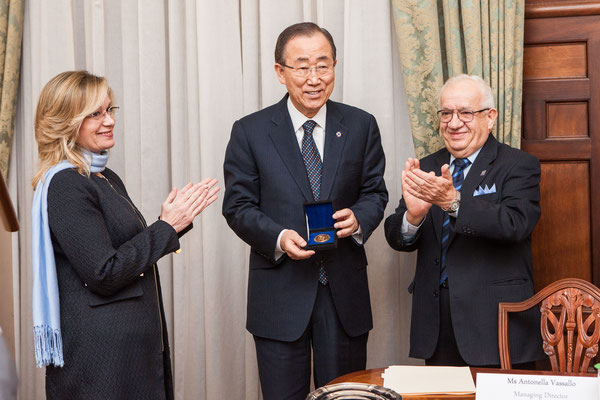 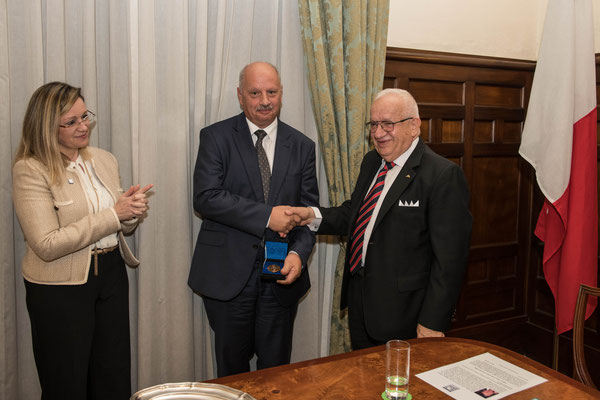 In her memory the Board of Governance of IOI awards the Elisabeth Mann Borgese Medal to recognise outstanding actions in favour of our global oceans. Notable recipients of the EMB medal have been:

2019 - Karmenu Vella, Former European Commissioner for Environment, Maritime Affairs and Fisheries; in appreciation of enduring commitment to bringing the seas and oceans to the forefront of the European and global agendas throughout his tenure as European Commissioner for the Environment, Maritime Affairs and Fisheries (2014-2019). This medal recognizes leadership in promoting the importance of sustainable maritime occupations and economies that preserve natural resources on land and sea and, especially, for creating and maintaining global partnerships aimed.

2017 - Professor Alfred J Vella, Rector - University of Malta; for his support of the IOI and its capacity development, education, and training programmes throughout his term of office as Pro-Rector for Academic Affairs of the University of Malta, and as a member of the IOI Board of Governors. The award recognizes specifically his dedication and foresight in the championing of the Master of Arts Degree on Ocean Governance, jointly implemented with the Faculty of Laws and the IOI at the University of Malta, and his input and guidance in academic issues for the IOI’s strategic plan of action of 2014 and beyond.

2015 - H E Ban Ki-Moon, United Nations Secretary General; for his inspiring leadership on ocean issues throughout his tenure as UN Secretary General, for placing the oceans at the forefront of the development agenda through the creation of a stand-alone Sustainable Development Goal (14), and hence bringing the oceans to the attention of the global decision making entities and the world community as a whole.

2014 - Dr Cherdsak Virapat, IOI Executive Director (2008-2014); in recognition of his leadership of the IOI throughout his term of office, during which the IOI capacity development programme was further developed and expanded regionally, globally, and at postgraduate level, and for his unfailing support to the mission of the IOI and the legacy of the IOI founder, Prof Elisabeth Mann Borgese.

2010 - Dr Li Haiqing; for his support to the International Ocean Institute and its training programmes and for his dedication to capacity-building for ocean managers from developing countries.

2009 - The Hon Dr Joseph Borg, former EU Commissioner for Maritime Affairs and Fisheries; in appreciation of a lifetime commitment to the cause of the ocean and in the promotion of the principle of the common heritage of mankind and in recognition of excellence in outstanding leadership in promotion of maritime governance in the service of humanity.

2008 - Dr Gunnar Kullenberg, former IOI Executive Director; in recognition of the inspired leadership of the IOI and the foresighted direction of ocean governance and the IOI mission.

2008 - Ambassador Tuiloma Neroni Slade; for his valuable contribution to the cause of small island states, ocean governance and advocacy for the United Nations Convention on the Law of the Sea.

2007 - The Hon Prof Guido De Marco, President Emeritus of Malta; in recognition of the invaluable contribution to IOI and the unfailing support to the mission of the IOI founder, Prof Elisabeth Mann Borgese.

2007 - Dr Iouri Oliounine, former IOI Executive Director (2002–2008); in recognition of the inspired leadership of the IOI during the critical years of transition and for maintaining the legacy of the IOI founder, Prof Elisabeth Mann Borgese.

2007 - Ransom A. Myers; in recognition of his scientific contribution to the understanding of our oceans and their resources and for his vigorous and tireless fight against their ecological destruction.

2007 - Prof Alexander Yankov; in recognition of life-long achievements and dedication to the course of Ocean Governance.

2005 The Hon Mr Geoff Regan, Minister of Fisheries and Oceans of Canada; for his "exemplary leadership in the field of Ocean Governance."

2005 - Dalhousie University; for its continued support to IOI and its commitment to promote ocean governance.

2005 - Canadian International Development Agency (CIDA); for its support to IOI and the contribution it made to development, health and peace of the oceans.

2005 - H E Kofi A Annan, Secretary General of UN; The Board of Governance of IOI decided that  the first recipient of the Elisabeth Mann Borgese medal should be the Secretary-General of the United Nations, Mr Kofi Annan, in gratitude and recognition of his deep sense of justice, the contribution he has made to the welfare of developing countries, the inspiring leadership he displayed as Secretary General of the United Nations in meeting the tragic challenges of the Asian tsunami through his mobilisation of the international community.  In many of his written and spoken words he warned of the need to meet the challenge of natural disasters – e.g. An Increasing Vulnerability to Natural Disasters (September 1999) The Earth Second Chance (May 2002) and his remarkable report the Ocean – Source of life. The ocean community owes a debt of gratitude to Secretary General Kofi Annan for his remarkable leadership, commitment and contribution in the service of humanity.