IOI is represented at the Twenty-second meeting of the UN ICP on Oceans and the Law of the Sea: "Ocean observing", 6 - 10 June 2022 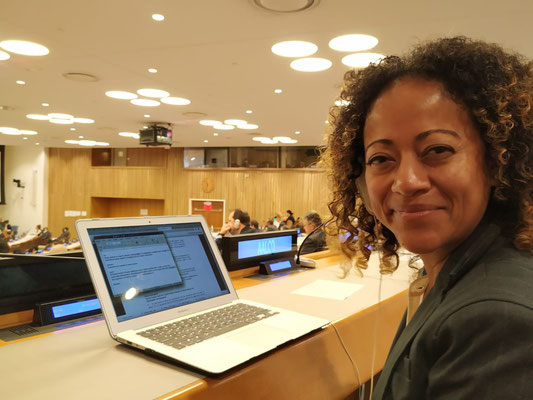 The United Nations Informal Consultative Process on Oceans and the Law of the Sea (ICP) was held at UN Headquarters in New York from 6–10 June on the theme: Ocean Observing. This was the first in person meeting of the ICP since the onset of the pandemic and  Ms Liliana Rodriguez Cortes, Delegate of the IOI to the UN HQ, represented IOI during the first day of the meeting.

During the opening of the meeting, the Director of the Division for Ocean Affairs and the Law of the Sea, Mr Vladimir Jares, emphasised the importance of the ICP and its outcomes in supporting the work of the General Assembly of the United Nations as the global ocean affairs mechanism. Mr Jares, as well as Mr Liu Zhenmin, Under-Secretary-General for Economic and Social Affairs also underlined the importance of ocean observation in underpinning the Sustainable Development Goals and the Decade for Ocean Science for Sustainable Development. They also highlighted the opportunities for further progress on oceans, including ocean science, during the forthcoming United Nations Ocean Conference to be held in Lisbon, Portugal (27 June – 1 July 2022). Delegations generally echoed these opening statements, and certain delegates further emphasised the importance of the United Nations Convention on the Law of the Sea as the legal framework for scientific research and reaffirmed the importance of costal State rights in this regard.

A series of expert panellists provided information on a wide range of topics (available here). The meeting left participants with a clear sense of the importance of ocean observation, the opportunities afforded by the many initiatives being undertaken, but also the challenges which remain with respect to collaboration, capacity, technology transfer and regulatory frameworks. It was also made clear that these challenges must be quickly and effectively addressed as effective and participatory ocean observation is central to rebalancing our relationship with the ocean - and time is running short.